The Second BiH Pride March Announced: Passing Through the Cities of Bosnia and Herzegovina because “No life within four walls” 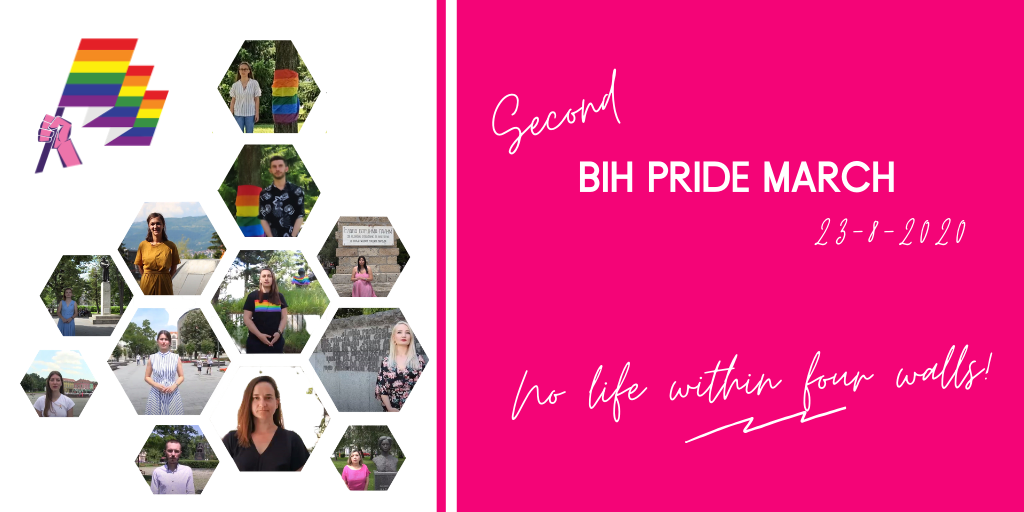 Today we are announcing the second BIH Pride March that is going to be held on August 23rd in Sarajevo. BIH Pride March is a protest against inequality and it represents a battle for gaining a better condition for lesbian, gay, bisexual, transexual, intersexual, and queer people in the society of Bosnia and Herzegovina.

Even though we are currently facing a crisis due to the harsh Coronavirus situation, LGBTIQ community is familiar with everyday life lived in isolation and fear of potential attacks. Likewise, we know the importance of maintaining a continuous Pride March for the BIH LGBTIQ community. It is a way of empowering and offering security in a society which is aggressive and violent towards differences, and which rejects, discriminates, mistreats, does not protect, and does not respect the law. Pride March is an important platform that fights for the rights of other minority groups, for all those whose voices cannot be heard and whose rights and freedoms are daily jeopardized by being oppressed, ignored, and left on the margins of the society.

BIH Pride March was created for the purposes of improvement of LGBTI members’ everyday lives in BiH. By using the right for public gatherings which is guaranteed by the Constitution, we are going out onto the streets because our lives cannot wait and suffer the indolence of the changes in the system.

BIH Pride March is a reaction of LGBTI people to the difficult economic and social situation which is additionally worsened by the current COVID-19 pandemic; just as unemployment, corruption, young people deserting the country, contaminated air and water, selective rule of law, nationalism, fascism and racism – just as many other problems that daily affect our lives too.

Extreme situations, such as a pandemic, further remind us of how bad is the law status of the marginalized groups in the country. That is why we think now it’s even more important to get out onto the streets. It’s high time that we demand drastic changes and a systematic, continuous protection of rights for the marginalized groups.

We, lesbian, gay, bisexual, transexual, intersexual, and queer people are, through variety of our identities, an inseparable part of Bosnia and Herzegovina’s society. We are labourers, sisters and brothers, unemployed persons, Roma women and men, and citizens of Bosnia and Herzegovina. Our identity is not only being an LGBTIQ person, but because of our sexual orientation, gender identity, and sexual features, we daily put up with lack of sympathy that leads to the lives of LGBTIQ persons to be on the margins, and it increases violence and discrimination.

Homophobia, biphobia, transphobia, prejudice and violence do not strike only LGBTIQ people, but our families and friends as well. Hate makes the entire society imprisoned. Therefore, through the Pride March we are not only fighting for the rights of LGBTIQ people, but for all the people who are excluded from the society.

There are still no safe public places for LGBTIQ people in BIH. Homophobia, which we are facing whenever we go to public institutions, coffee bars, restaurants, theatres, cinemas, or any other public place, is condemning us to the life within four walls and pushes to the margins. Our lives outside those four walls are not safe and our social lives are not free, so the reality of our lives is overwhelmed by fear of violence and rejection.

The time of the pandemic, uncertainty, and life within four walls has not been easy for anyone. This period has, in a pictorial manner, reminded all of us what it means to be separated from society, family, and friends; just like constantly being scared for the safety of people we love and not being able to see people who are close to us. This has shown us that life cannot exist within four walls.

Life in isolation has brought to surface strategic challenges of life within four walls: from difficulties in organization of life in isolation, lack of a support system, apathy and difficulties in communication between family members, to coping with fears and an increase in percentage of domestic violence, violence against women, violence against children and the elderly.

On the other hand, isolation and violence is not a novelty to LGBTIQ people. We have been experiencing that throughout our whole lives and that is why we think it is important that we keep on marching to be present in public space, and to be a reminder that we exist and that we demand rights.

It is a fresh example of how life looked like in isolation during the pandemic, the experience that our fellow citizens gained when it comes to not being able to live outside four walls; isolation, and invisibility. Also, what it means not having health care, not being able to participate in public life; all that can increase empathy and solidarity towards LGBTIQ people. Nobody was comfortable living within four walls for two months during isolation. Imagine what it feels like to live that way your whole life?

Violence, discrimination, isolation, marginalization, hatred, homophobia, biphobia, transphobia – are all system’s problems and are deeply ingrained both in society and public institutions. Homophobia is present with politicians who infrequently, without consequences, express their negative views toward the existence of LGBTIQ people. That way they intensify all of the abovementioned problems that LGBTIQ people face.

Because of that, BIH Pride March is an anti-fascist resistance against the rise of fascist currents which exist in our society, and which want to smother the rights of all the marginalized groups. One of the examples is a current situation concerning people on the move. Those people are migrants who live in miserable conditions not worthy of human dignity, while our country does not respond to their needs. On the contrary, it frequently contributes to the increase of racism that exists in our society.

We believe that only by going out on the streets united, we can fight against the fascist currents we are surrounded by. The rights of the LGBTIQ people is everyone’s concern and bad life standards of marginalized groups are a reflection of the entire socio-economic condition of the country’s people.

By being aware of the current epidemiologic situation, we are announcing this year’s BIH Pride March in this manner, with respect to all recommended measures. Organizing Committee of BIH Pride March is going to carefully observe the situation and all the recommendations and measures that become official in the forthcoming period; and organize the second BIH Pride March accordingly.

The Organizing Committee of BIH Pride March currently has 22 members who come from all parts of Bosnia and Herzegovina. We are extremely delighted that there is a great interest in participation in organizing the second BIH Pride March. It should be highlighted that even though BIH Pride March is taking place in Sarajevo, all other cities and places of BIH are included.

We are announcing the second BIH Pride March to take place on the 23rd of August, 2020., starting at 12.00h in Sarajevo. All other details concerning the marching itself, safety measures, the route and all other technical details will be announced on time through our communication channels.

The continuity of fighting by protest marching is inevitable in order to make significant and long lasting changes for the state of rights and lives of LGBTIQ people, just like all other marginalized groups in the society.

See you on the 23rd August in Sarajevo!

After all, there is no life within four walls!